The fusion of quantum computing and machine learning has become a booming research area. Can it possibly live up to its high expectations?

The fusion of quantum computing and machine learning has become a booming research area. Can it possibly live up to its high expectations?17 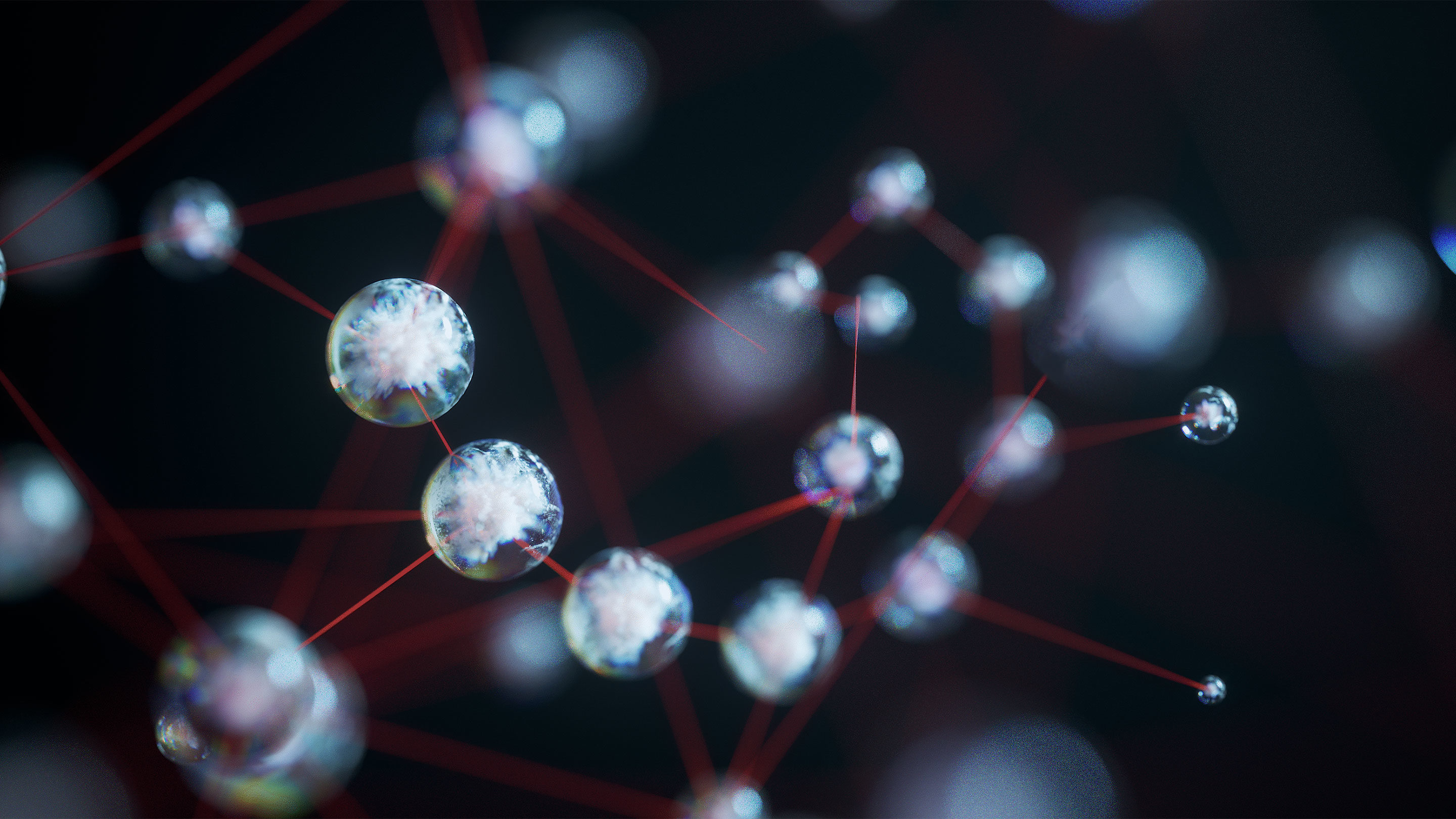 In the early ’90s, Elizabeth Behrman, a physics professor at Wichita State University, began working to combine quantum physics with artificial intelligence — in particular, the then-maverick technology of neural networks. Most people thought she was mixing oil and water. “I had a heck of a time getting published,” she recalled. “The neural-network journals would say, ‘What is this quantum mechanics?’ and the physics journals would say, ‘What is this neural-network garbage?’”

Today the mashup of the two seems the most natural thing in the world. Neural networks and other machine-learning systems have become the most disruptive technology of the 21st century. They out-human humans, beating us not just at tasks most of us were never really good at, such as chess and data-mining, but also at the very types of things our brains evolved for, such as recognizing faces, translating languages and negotiating four-way stops. These systems have been made possible by vast computing power, so it was inevitable that tech companies would seek out computers that were not just bigger, but a new class of machine altogether.

Quantum computers, after decades of research, have nearly enough oomph to perform calculations beyond any other computer on Earth. Their killer app is usually said to be factoring large numbers, which are the key to modern encryption. That’s still another decade off, at least. But even today’s rudimentary quantum processors are uncannily matched to the needs of machine learning. They manipulate vast arrays of data in a single step, pick out subtle patterns that classical computers are blind to, and don’t choke on incomplete or uncertain data. “There is a natural combination between the intrinsic statistical nature of quantum computing … and machine learning,” said Johannes Otterbach, a physicist at Rigetti Computing, a quantum-computer company in Berkeley, California.

If anything, the pendulum has now swung to the other extreme. Google, Microsoft, IBM and other tech giants are pouring money into quantum machine learning, and a startup incubator at the University of Toronto is devoted to it. “‘Machine learning’ is becoming a buzzword,” said Jacob Biamonte, a quantum physicist at the Skolkovo Institute of Science and Technology in Moscow. “When you mix that with ‘quantum,’ it becomes a mega-buzzword.”

Yet nothing with the word “quantum” in it is ever quite what it seems. Although you might think a quantum machine-learning system should be powerful, it suffers from a kind of locked-in syndrome. It operates on quantum states, not on human-readable data, and translating between the two can negate its apparent advantages. It’s like an iPhone X that, for all its impressive specs, ends up being just as slow as your old phone, because your network is as awful as ever. For a few special cases, physicists can overcome this input-output bottleneck, but whether those cases arise in practical machine-learning tasks is still unknown. “We don’t have clear answers yet,” said Scott Aaronson, a computer scientist at the University of Texas, Austin, who is always the voice of sobriety when it comes to quantum computing. “People have often been very cavalier about whether these algorithms give a speedup.”

The main job of a neural network, be it classical or quantum, is to recognize patterns. Inspired by the human brain, it is a grid of basic computing units — the “neurons.” Each can be as simple as an on-off device. A neuron monitors the output of multiple other neurons, as if taking a vote, and switches on if enough of them are on. Typically, the neurons are arranged in layers. An initial layer accepts input (such as image pixels), intermediate layers create various combinations of the input (representing structures such as edges and geometric shapes) and a final layer produces output (a high-level description of the image content). 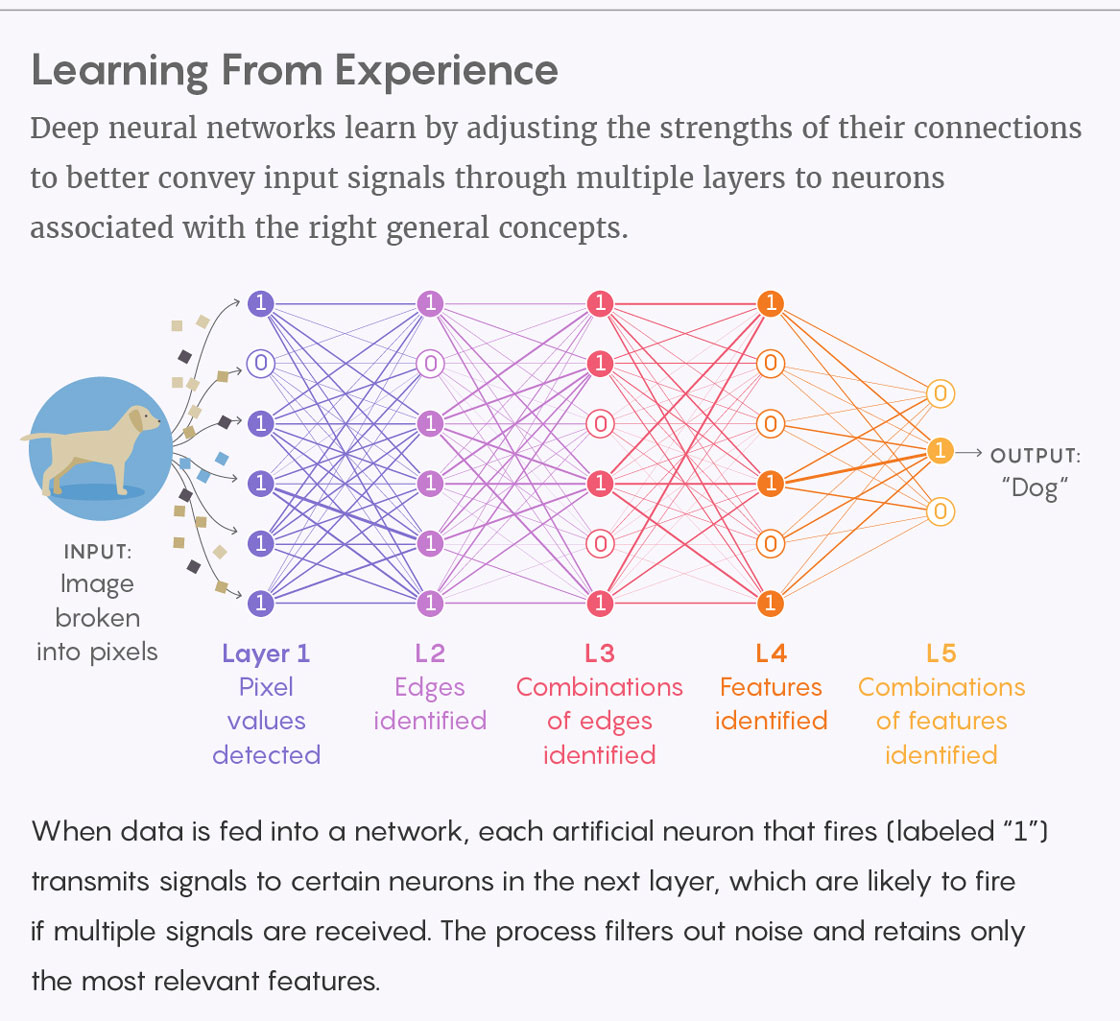 Crucially, the wiring is not fixed in advance, but adapts in a process of trial and error. The network might be fed images labeled “kitten” or “puppy.” For each image, it assigns a label, checks whether it was right, and tweaks the neuronal connections if not. Its guesses are random at first, but get better; after perhaps 10,000 examples, it knows its pets. A serious neural network can have a billion interconnections, all of which need to be tuned.

On a classical computer, all these interconnections are represented by a ginormous matrix of numbers, and running the network means doing matrix algebra. Conventionally, these matrix operations are outsourced to a specialized chip such as a graphics processing unit. But nothing does matrices like a quantum computer. “Manipulation of large matrices and large vectors are exponentially faster on a quantum computer,” said Seth Lloyd, a physicist at the Massachusetts Institute of Technology and a quantum-computing pioneer.

For this task, quantum computers are able to take advantage of the exponential nature of a quantum system. The vast bulk of a quantum system’s information storage capacity resides not in its individual data units — its qubits, the quantum counterpart of classical computer bits — but in the collective properties of those qubits. Two qubits have four joint states: both on, both off, on/off, and off/on. Each has a certain weighting, or “amplitude,” that can represent a neuron. If you add a third qubit, you can represent eight neurons; a fourth, 16. The capacity of the machine grows exponentially. In effect, the neurons are smeared out o